The third edition of the Developers Conference Mauritius, organised by the Mauritius Software Craftmanship community(MSCC), officially kicked off today at Voilà Bagatelle Hotel. Being a first time attendee I decided not to go alone and take some friends along 😅.

We met at 09:15 and reached the venue 5 minutes later where to wait another 5 minutes to collect our badges since the room was quite crowded. 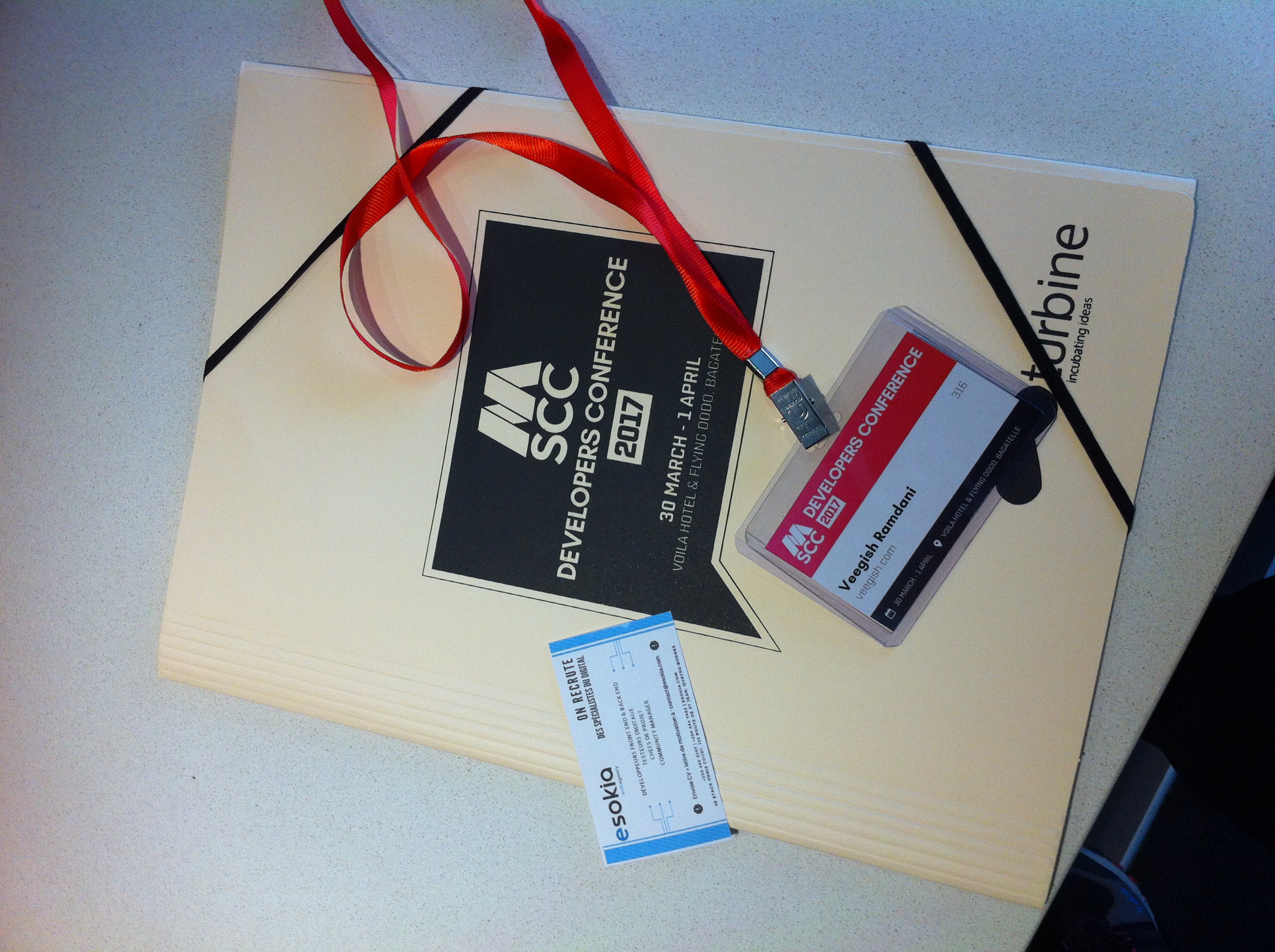 Badge, a recruiting ad from a sponsor and a folder 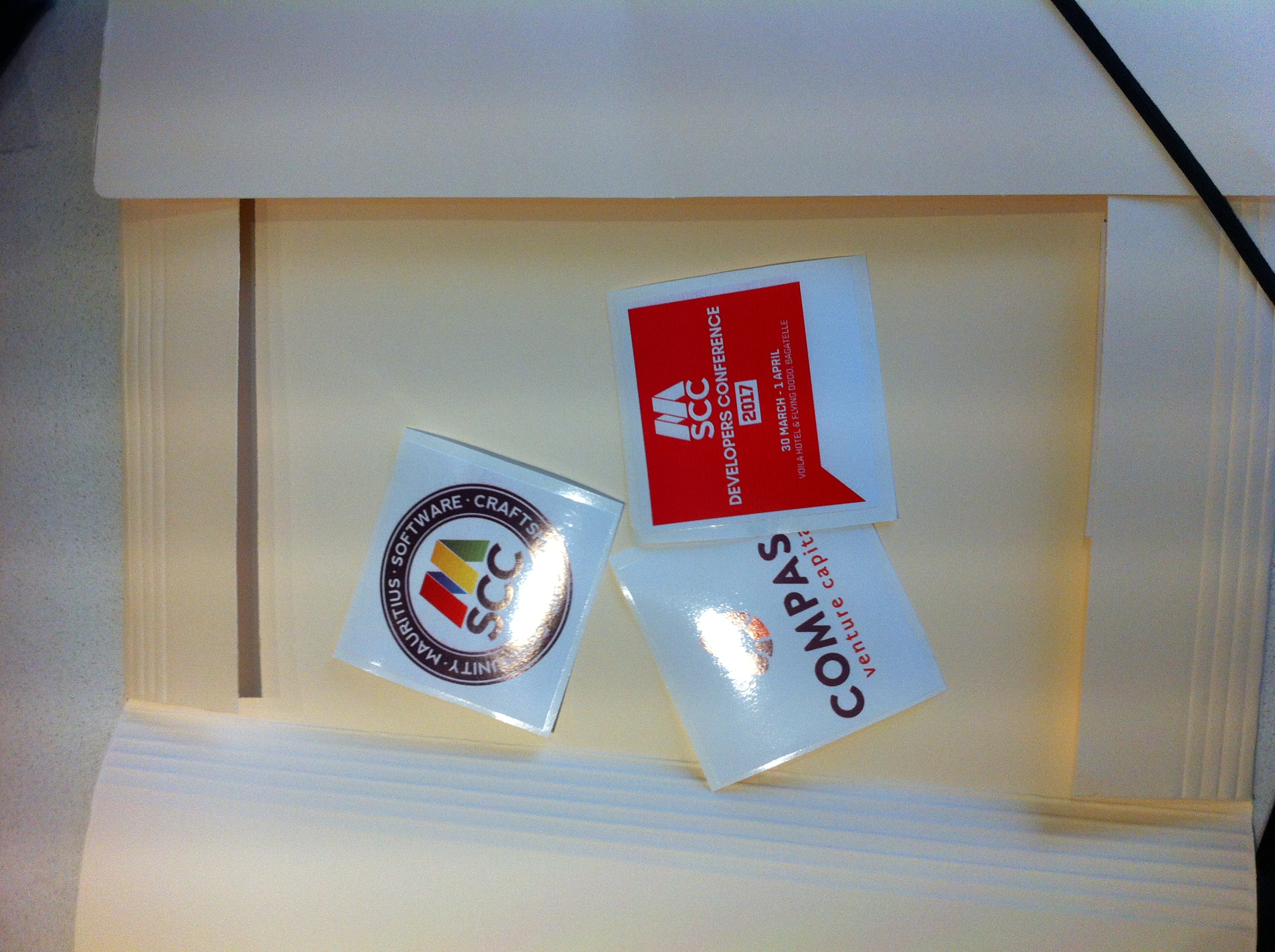 Inside the folder: Surprise! Some swag – Free stickers, a notebook & a pen

The keynote was presented by Jochen Kirstätter and Vidia Moonegan. It started by addressing some of the changes the world is currently facing, which were referred to as ‘disruptive forces’, such as an ageing population, industrialisation and urbanisation.

With an ageing population economic growth will slow down and innovation may be halted. Therefore it is important to train young  graduates so as to provide better human capital to the job market and promote investment, technological growth and innovation. 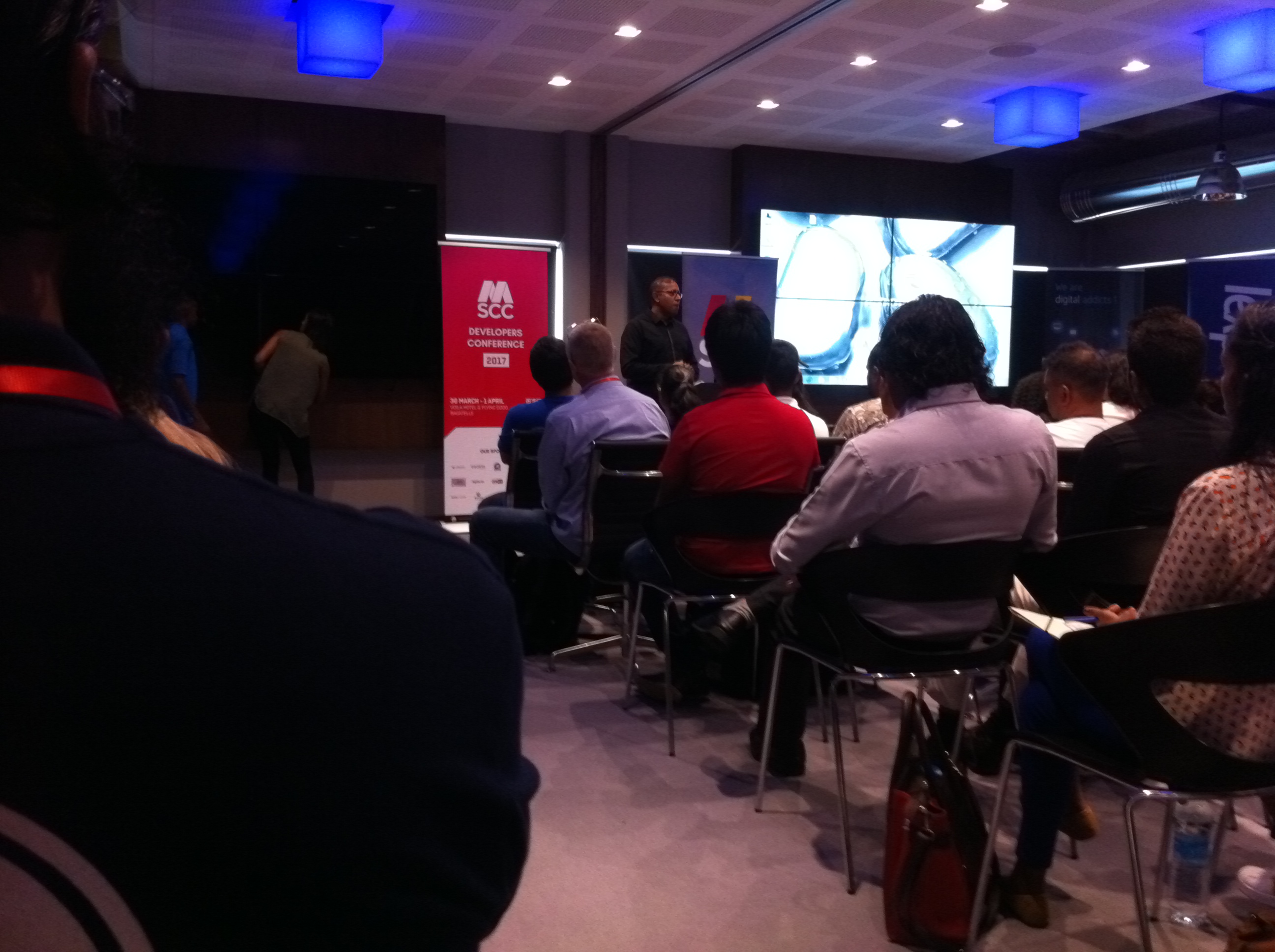 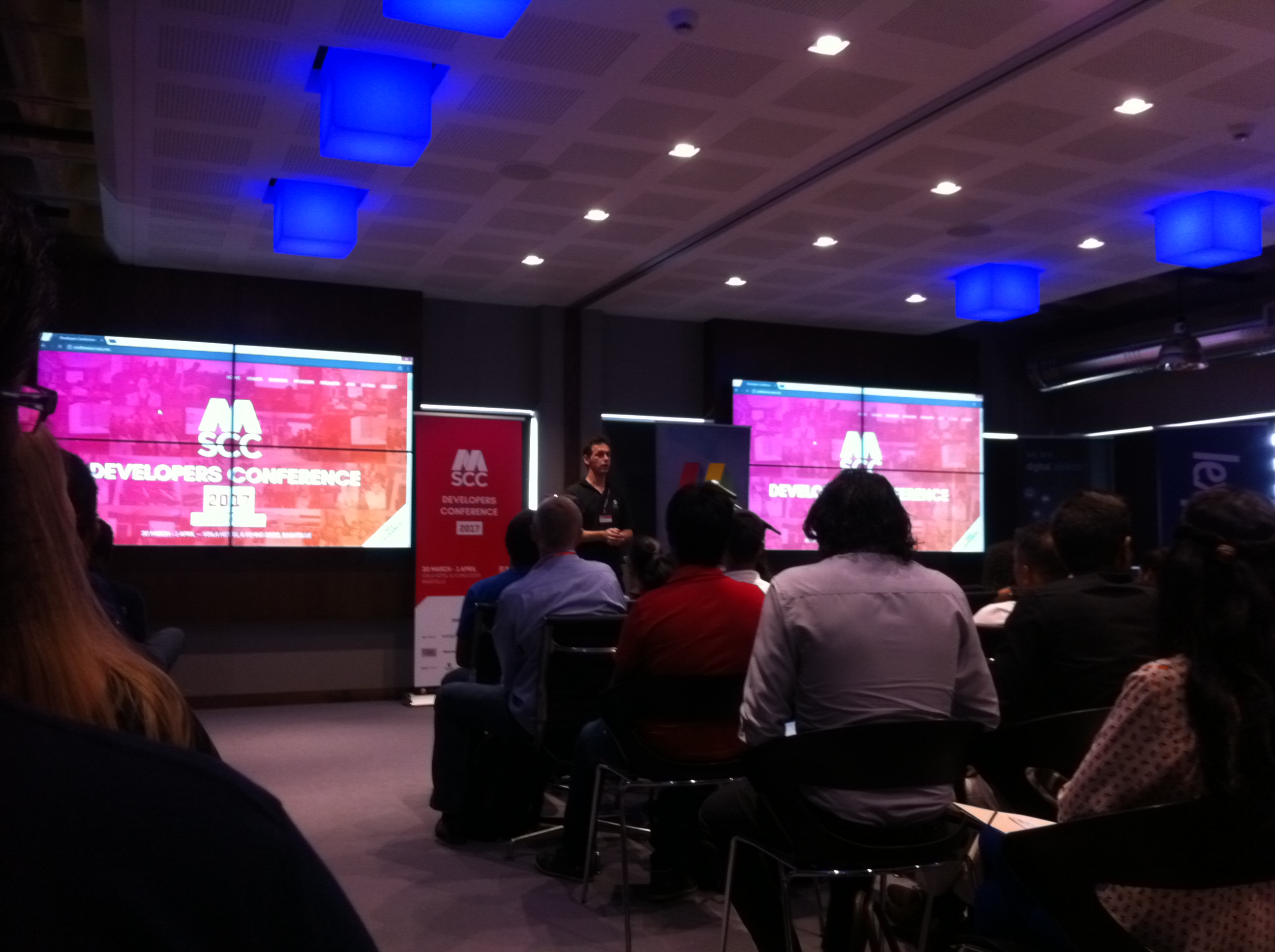 You are not here just to develop new products, but for much more

Next focus was on the FinTech industry – how software is transforming the financial sector globally, especially in developing countries. Mauritius being a financial hub in Africa itself may want to adopt the latest financial technologies like blockchains if it wants to retain and improve its position as an international player.

Finally Jochen closed the keynote by talking about the importance of girls in the tech industry, how they can contribute and mentioned that 20% of the sessions were going to be presented by women.

This session was about introducing the MSCC and its aims to developers and potential members. Jochen talked about the benefits of attending local meetups along with some current members who shared their stories about the group. An important point addressed during the session was about contribution. Jochen emphasised on the need to contribute to Open Source Software(OSS) using platforms like Github, even if it’s about fixing a small typo in a piece of code. He added that we shouldn’t let the feeling of being a beginner get in our way and prevent us from contributing to OSS because at the end of the day we are all beginners, always learning the latest technologies which are constantly emerging on the market.

| Translates to: We do not learn for school, but for life.

11:30 – Building a successful IT industry

Building a successful IT industry takes more than just good marketing. In this session Loganaden Velvindron from hackers.mu spoke about the factors influencing the IT industry both from a local and global standpoint. In order to layout the weaknesses Mauritius has in it’s IT industry, he compiled some data from Google Public Data and Github. One of the comparisons was about the difference between the amount of developers from Mauritius and Singapore who owned a Github account. The difference was quite significant with Mauritius being quite far behind singapore in terms of OSS contributions. The reason this comparison was carried out based on Github data was because nowadays having an online persona greatly increases the potential of being recruited by companies in the IT industry. It’s easier and more efficient for companies to recruit employees from a country where the majority of developers  have an online identity. Otherwise they would have to carry out extensive research about the human capital they are being offered by a country since very little information can be found online about it’s labour force. Therefore being active online greatly helps towards bringing inward invesment. 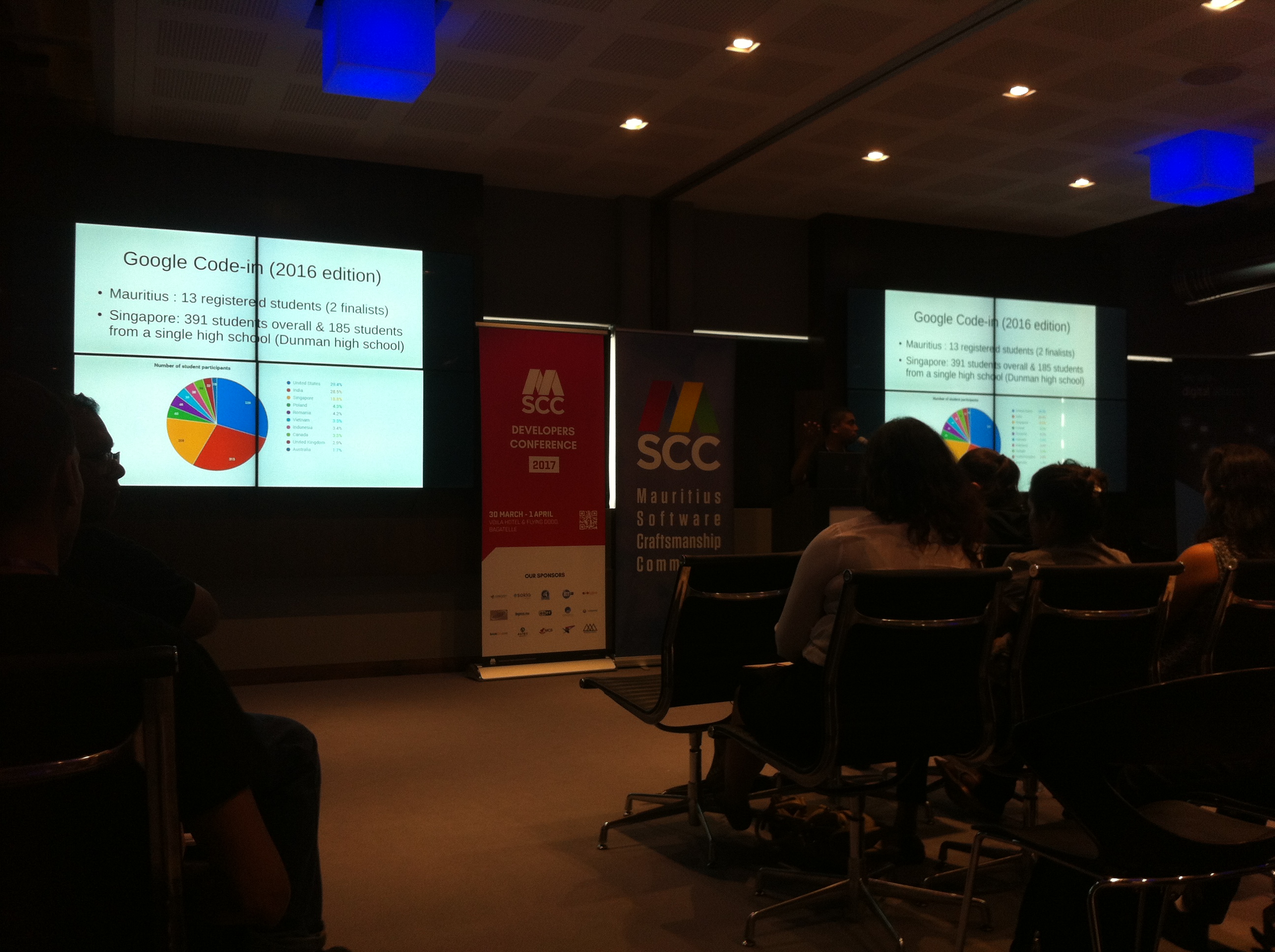 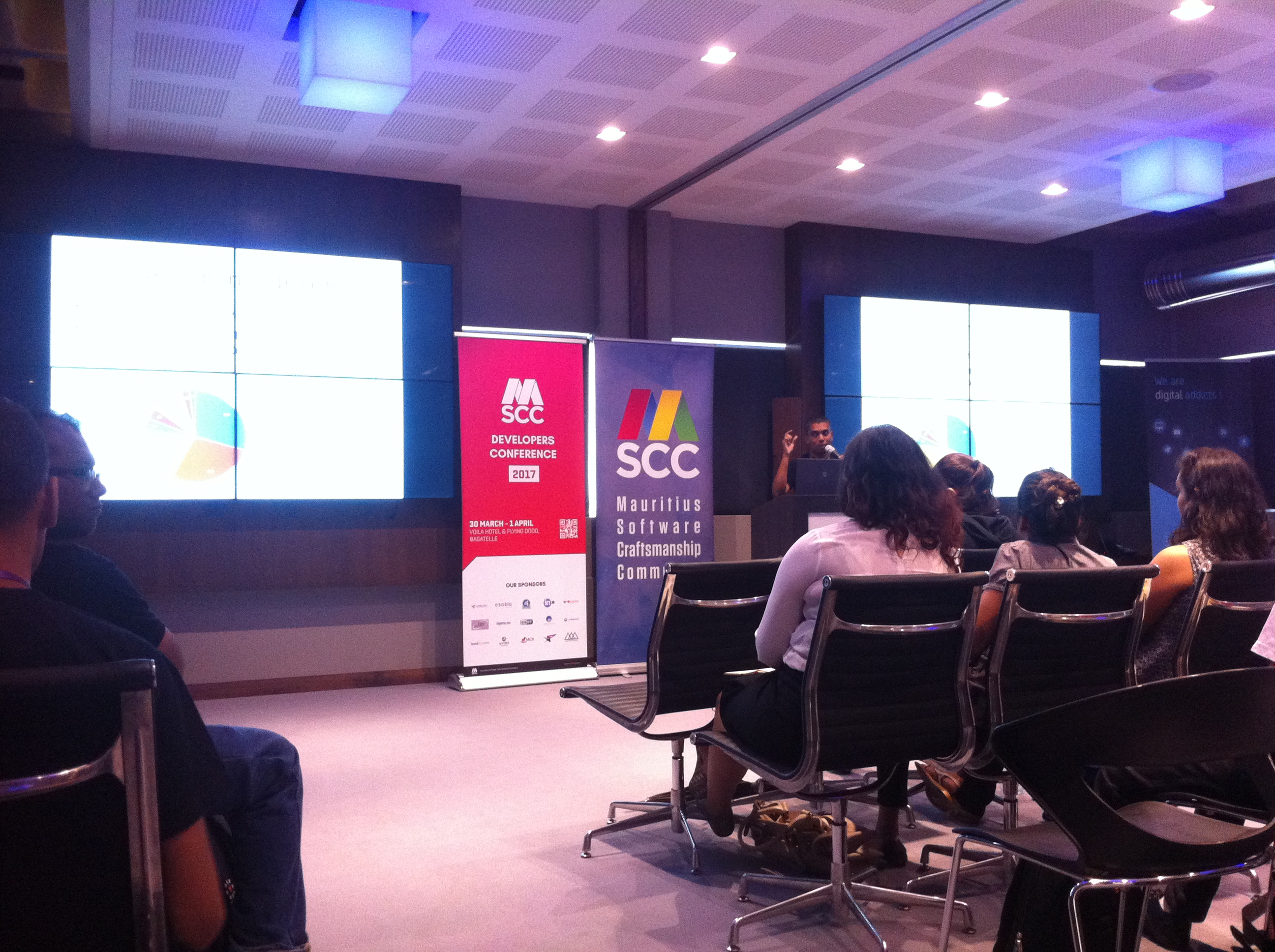 Avinash Meetoo, who was also present, seized the opportunity to speak about how automation is currently changing the landscape of the job market and why we need a young population that can compete on international grounds in order to meet future demands. 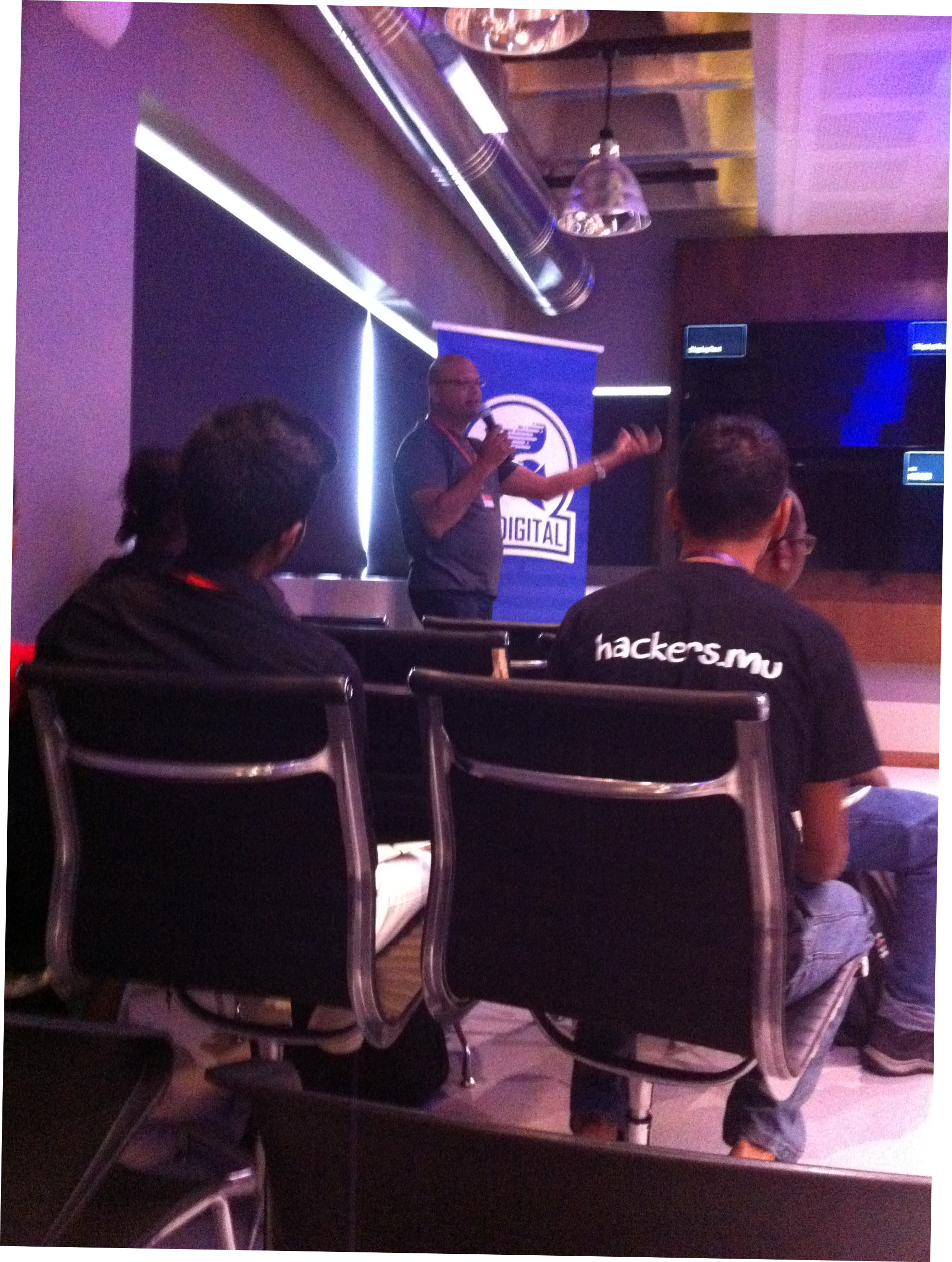 Your online persona needs to be controlled by you

| Literally what it means: build a distinguishable online identity to improve visibility

Loganaden also spoke about how hackers.mu has been contributing towards patching software vulnerabilities in OSS being used by millions of people and encouraged others to do the same.

There were more sessions that followed after of course but we chose not to attend them. It’s not the end however. There are two more days to go! Oh, another thing they encouraged was blogging. So here’s my new blog and this being my first post…in ages.

I have recently been exploring C# at work and decided to set up a development environment on my personal workstation, which is currently running Manjaro Ornara 21.0.7. I initially checked the official documentation for installing .NET on Linux but there were no mention of arch-based systems instructions, although

At last, I got the opportunity to wear that weird cap 🎓 and the fancy gown. After all the struggles I went through for the past 3 years, the idea that I am no longer stuck into what seemed like an endless loop of failures still feels very much dreamlike, just

Edit[28 JAN 2020]: The patch has been added to OpenSSH 8.2: https://github.com/openssh/openssh-portable/commit/4594c7627680c4f41c2ad5fe412e55b7cc79b10c As is tradition, every year the cyberstorm.mu team takes part in the IETF hackathons. This time we had more newcomers who joined us for the hackathon, namely Yashveer Jadoo,